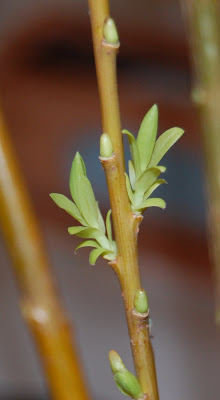 In the world of plants there are few that are easier to root than a willow. Whether you have a weeping willow, contorted willow, or dappled willow they all root very easily. In most cases all you need to do is stick a branch in the ground, keep it watered and it will grow! In fact I just did that with several green weeping willow cuttings a couple weeks ago and they are leafing out perfectly. Recently I took a few cuttings from a Japanese Dappled Willow (Salix integra) to root. I made about six cuttings of varying thickness about 8-12 inches long. I didn’t stick them in soil as I mentioned earlier but put them in a small opaque vase filled with water. A week later nearly all the cuttings have rooted. The leaves that were on the branches all dried up so I stripped all the remaining leaves off the willow branches. This actually works well for two reasons:

1)The stem cutting can concentrate better on growing roots without trying to save the leaves.
2)New leaves sprouting are good indicators of rooting.

I’m using the Japanese dappled willows to create a border along one edge of our property. Now all that I need to do is plant them in the yard to replace some of the willows that didn’t make it through the summer. Lets just hope the deer stay away from these!

Hi! Thanks for visiting GrowingTheHomeGarden.com. I began this website in 2007 as a way to chronicle my garden experiences. Over the years I've focused on raised bed gardening and plant propagation so the content you find here will be heavily based on those subject areas. There are a few projects intermixed in the content. Use the search bar below to search through the various subject areas for the garden info you are looking for!