Last year we designed, built, and grew our first vegetable garden in our new home. The garden was made of two large beds that were subdivided into 3 smaller conjoined beds in an “L” shape. Unfortunately the vegetable garden layout we designed was built more around aesthetics than around function. Since then I’ve realized something: When designing vegetable gardens think function first aesthetics second.

The raised beds we were gardening in were all made of non-pressure treated pine as it is a cheap material devoid of the dangerous chemicals that can be found in some pressure treated lumber. The pine will eventually disintegrate but that will take a couple years and I can replace it with better materials as I can afford (i.e. cedar or redwood).

What I Didn’t Like About The Raised Bed Layout

I don’t like two things about my initial vegetable garden design. First of all it impaired my ability to move around the garden easily because there isn’t enough space between the raised beds. Secondly the garden design was an inefficient use of space. Putting the raised beds into an “L” shape left some spaces that could have been better utilized. When planning a vegetable garden design always try to maximize your space. We’ll dress up the outside of the garden along the fence and it will look great, the veggies can just be themselves! After all, it’s what’s on the inside (of the garden) that counts. 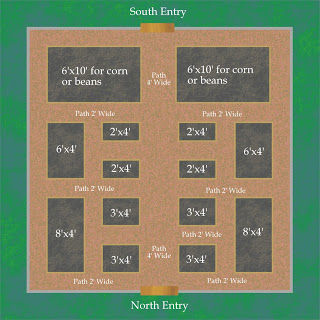 The vegetable garden layout I have planned now will require some initial work for me but should payoff by saving me from some work in the future. My new garden design will make a more effective use of space in the garden. All the beds will be rectangular and will be spaced 2 feet from each other. The 6’x10′ beds on the southern side (top of the plan) will be used for corn and beans this year and may be turned into raised vegetable beds next year. For now I’ll just turn the soil, add compost, and plant in the existing ground. Down the center of the garden will be a 4 foot path through the raised bed area that will allow me to bring a wheelbarrow through easily. We’ll eventually put a fence around the garden with two gates but I’ll save our fence ideas for later.

I know many people object to using gravel for garden paths but I can’t think of a better way to cover the walking areas inside the vegetable garden. The main disadvantage of gravel in the garden is that it tends to end up where you don’t really want it (like in the grass, in the beds, in your shoes, etc.). Re-mulching paths each year isn’t the best of options and the higher initial cost of gravel will prorate itself over time. I definitely don’t want to have to mow in the garden!

The vegetable garden project can be broken down into smaller parts to make it easier on the budget.