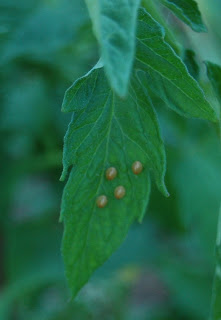 Mother nature sends us all kinds of good things to help us with the bad, we just have to know where to look! Everyone knows about lady bugs and how beneficial they are too the garden but there are other little insects that can do a good job too. Take my recent discovery of assassin bugs for example. One day while inspecting my vegetable garden I discovered six insect eggs. Three were on a tomato plant and another three were on a garlic leaf. I was fearful of what they would become and decided that I would allow the eggs to hatch in a jar so that I would find out exactly what kind of insect was setting up a nursery in my garden. I suspected caterpillars but since I have very little knowledge of entomology I wanted to be sure. My hope was that I would be able to identify any future eggs I happened to see. I pulled the sections of leaves where the eggs were and placed them in the jar, then punched a few holes in the top and waited. 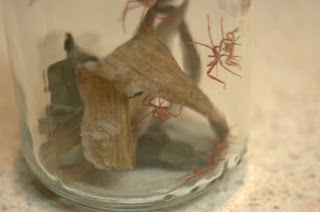 A few days later we discovered that these were not harmful garden predators but were really beneficial insect predators called assassin bugs! They are related to squash bugs (both in the order Hemiptera) and look just as creepy but what they do makes them very cool. Assassin bugs seek out and destroy aphids, boll weevils, caterpillar eggs and larvae. Now where were they when the cabbage loopers were attacking? They will also attack other arthropods like those squash bugs and will even attack other beneficial insects like ladybugs. Assassin bugs inject a poison into their prey that is capable of hurting people as well if they happen to get bitten by them. It’s best not to handle them and just to let them do their job in the garden.

I released my six assassin bug nymphs into the garden on the cucumbers plants. My hope is that they will seek out and eliminate any cucumber beetles or other pests they may find. When organic gardening beneficial insects are a neccessity and it’s important to know those friends and allies!