Last year I came up with a layout for our vegetable garden that I later decided wasn’t as effective as I hoped. This year I made a better raised bed layout that focused more on the convenience of the gardener and it is working great! The central path makes getting around a breeze and the smaller paths around each bed have plenty of width for a gardener to get through. I’ve even set up a nifty little irrigation system using 1/4″ soaker hoses and tubing which I believe is going to be really effective over the hot summer months. I’ll post more about that later but today let me share with you the difference the layout of my garden makes. First here’s a look at how the old layout was. The “L” shaped beds looked pretty good to start with but I quickly came to realize some of the negatives of this arrangement. The greatest drawback was the difficulty in mowing around the beds. Without mulching around the outside of the beds the grass quickly grew to be a pain around the outsides of the beds. The tall grass kept the moisture in around the wood which increased the rotting of the non-treated wood. The elimination of the grass really wasn’t tied to this layout since all I had to do was make a mulched pathway around them, but of course I just never quite got around to it.  You know the saying! The old layout had two “L” beds with the idea of a circle around it and a center 4’x4′ bed. I was saving the 4’x4′ bed for this year but went a different route

In the picture below you can see the issues surrounding the bed. Too messy, and truthfully the unkempt state drove me crazy, but I’m not crazy, really I’m not, not too crazy anyway. 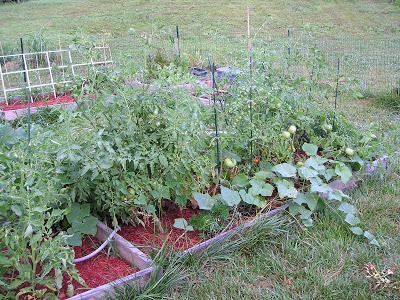 Now the beds are conveniently spaced out so that I can move around them easily. Mulch covers all the paths except for the pathway down the middle of the garden which is easy enough to mow with the push mower. Here’s a picture of the garden from our upstairs window. Our maple tree is obscuring the view a little but you can get the basic idea of the layout. 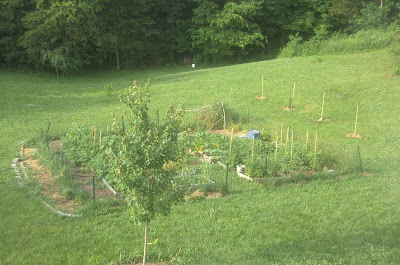 When you get little closer you can see the pathway between the beds. It’s mostly covered with mulch that I’ll add stepping stones to a few at a time. I’m not in hurry since I’d rather spend money elsewhere at the moment like the garden fence.  The beds in the quadrant all house tomato plants, at least that’s what I started with. Cucurbits have been showing up all over the garden, rogue cantaloupes and cucumbers. Not a bad problem to have! The Cherokee purple tomatoes are in the bed on the left while Brandywine and cherry tomatoes are on the 4’x8′ bed on the right.  Various basils are planted among the tomatoes. 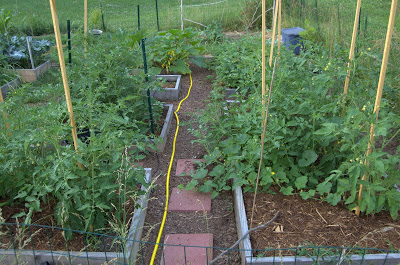 Here’s another tomato bed. I went a little crazy (just a little) with the tomatoes this year and probably overplanted. I planted 18-20 plants but I have 25-30 growing. How did that happen? Well…we are in the Volunteer State! At least one Brandywine volunteer emerged as well as several others. You can tell the Brandywine tomatoes by their distinctive potato leaf leaf shapes. I can’t think of a better volunteer for my garden! 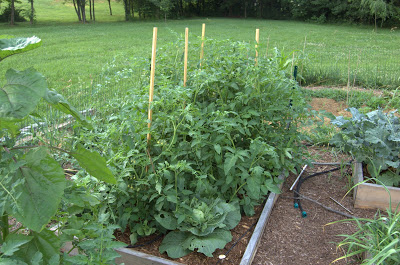 This bed is somewhat experimental. I fashioned a trellis for the cucumbers using a long pliable sycamore branch, leftover fence material, and a few tomato stakes. It’s fairly thick and should hold up the cucumbers. Underneath the trellis are many of the volunteer tomato plants and some cantaloupe. I had planned to be very organized and rotate crops by not planting tomatoes in this bed since it had dirt in it from tomatoes last year. You know what they say about “best laid plans” right? Please tell me because apparently I haven’t learned! 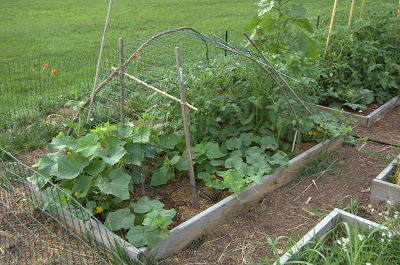 I have two beds on the right that are a complete and total mess right now. One contains the spinach that has now gone to seed and the lettuce that will be bolting soon. The other houses what was left of our radishes along with a few onions. I’ll be getting them prepared for more squash or something else soon. I may convert one of them into herbs only but I already have all kinds of herbs interspersed throughout the garden so it’s not a necessity.

I’m definitely happier with the current layout of the garden than the previous ‘L’ shaped garden layout. This one’s a keeper, at least for me. I highly recommend an organized grid pattern when setting up a vegetable garden for its convenience. Much of gardening is trial and error and what works best for me might not for you so experiment a little! If you are interested in advice on raised beds please take a look at these 11 Things to Think About When Designing Raised Beds and the follow-up post: 3 More Things About Raised Beds. Catchy titles don’t you think?