It’s taken a few years before my premonitions came to fruition. It’s not that I wanted it to happen I just expected it.  It was inevitable and couldn’t be avoided.  The ‘Bradford’ Pear tree in my front yard split. No storm brought damaging high winds that would wreak havoc among many species of trees. There were no diseases making the tree weak. It was the structure of the tree itself. It was genetically predisposed to split eventually.  Trees like this should not be planted in the landscape yet the builder of our neighborhood put two in every yard.  It’s a poor choice to plant but economical for someone wanting a cheap tree that looks impressive for a few years. 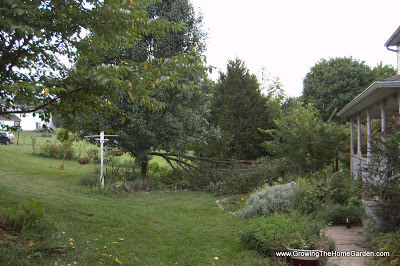 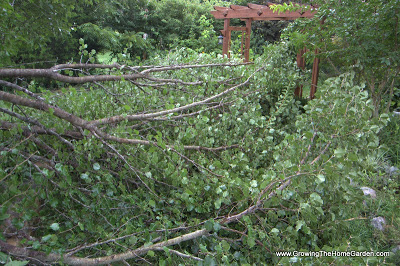 Bradford pears look impressive in the spring when their flowers cover the tree.  There isn’t a single square inch of canopy uncovered by blossoms. Of course that does lead to the characteristic ‘Bradford’ Pear awful rotten fish smell – but at least they look pretty.  A gardener could overlook the poor smell for the appearance of a good tree, but not the ‘Bradford’ pear tree.  It’s simply a weak tree.  The tree’s branches grow in a way that allows the tree to become easily damaged. The branches angle sharply from the center of the trunk, and there are a lot of branches.  The thickness of the branches and the angle combine to make an extremely weak joint on the tree predisposed to develop crack and eventually break completely off.  The heavy weight of the fast growing limbs eventually causes the tree to break into pieces. 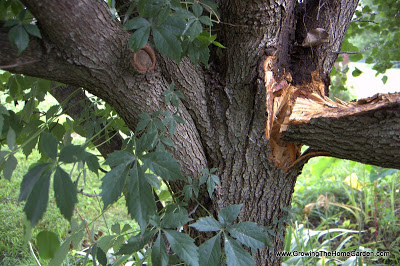 ‘Bradford’ pear trees are also an invasive tree that produce a small berry (it can’t even be called a pear) that the birds carry all over.  There are wild areas of Tennessee where you can see pear trees that have taken over.  In the springtime it looks like we have fields of “Q-tips” growing in the wild.

So why are Bradford Pear trees bad to plant in the garden?

Three strikes and they’re out!  At least they will be out of my landscape this fall.  The one that split in half will be preserved to provide shade for my hostas and heucheras until the weather is cooler and transplanting can begin.  Then I’ll find a tree that will provide shade and create privacy.  Ideally it would be a native or an edible tree but as long as it doesn’t have the characteristics listed above it will work!  Until then though I guess I will be working at clearing out this mess.  Aren’t ‘Bradford’ Pear trees wonderful? 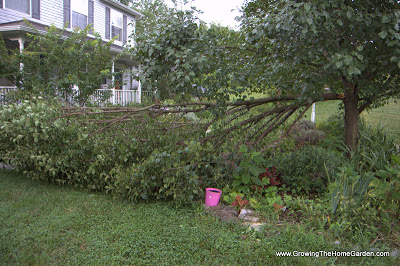