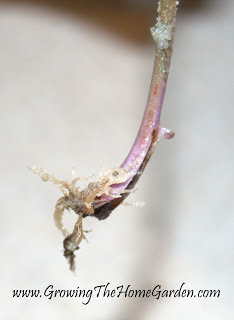 You know how I am, if I grow it I see if I can root it! The challenge this time was to root a heuchera from a leaf cutting. It isn’t difficult if you take from the right part of the plant. Just taking a cutting from a leaf isn’t good enough as it won’t result in any new foliage. What you need to do is to retain a little bit of the heuchera stem with the heuchera leaves. It contains the growth buds that will eventually form new leaves. After all what is a heuchera without leaves? If you want to be sure to get a piece of the stem select a part that has two to three leaves.

The Procedure:
In this case found the heuchera stem then used a sharp knife to remove a leaf with a small section of the stem from the main plant. After gathering the cutting material I dipped the heuchera cutting into rooting hormone then put it into my rooting medium. (I use sand but other combinations work fine also.) In about 4-6 weeks I found myself with with rooting like you see in the picture.

I potted up the new heuchera and it won’t be too long before new leaves and growth appears. Division works very nicely with heucheras too but the advantage of cuttings is that you can make more plants from a single plant than you can with division. Six weeks ago I divided a ‘Palace Purple’ heuchera into 11 divisions but by using the cutting technique I could have made 20-30. Cuttings take a little more time and care but the end result can mean more plants. Both techniques, division and cuttings, work well in concert with each other. When you divide you have an easy opportunity to find the appropriate material for cuttings.

(Here’s more information about the basics of taking cuttings)

When to take Heuchera Cuttings?
Cuttings are best left for spring time or when the weather is a little cooler but can be done anytime during the growing season. I would avoid taking cuttings too late in the fall since they may not harden off before cold weather begins.

An Important Note: Take care when selecting heucheras to propagate. Many heucheras have been painstakingly developed through breeding programs and have plant patents to protect the work of the growers.

Hi! Thanks for visiting GrowingTheHomeGarden.com. I began this website in 2007 as a way to chronicle my garden experiences. Over the years I've focused on raised bed gardening and plant propagation so the content you find here will be heavily based on those subject areas. There are a few projects intermixed in the content. Use the search bar below to search through the various subject areas for the garden info you are looking for!