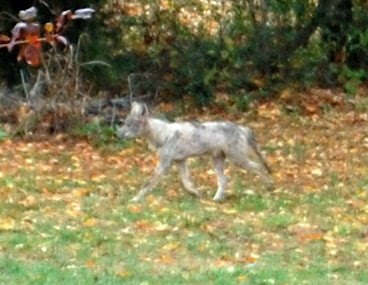 We were sitting at the breakfast table on Sunday morning when an unusual sight appeared from the wooded area in the back of our yard. We watched as this dog-like apparition glided from the woods and crept across the grass. It was a coyote and it wasn’t a welcome sight to my eyes. As a father of two small children I could only think of the dangers it presented to our family. I snatched my camera to take these two shots which are zoomed in and are very poor quality since I didn’t have time to change to the telephoto lens. After taking the shots I wasted no time and chased it off. I wanted the coyote to know that he wasn’t welcome here. 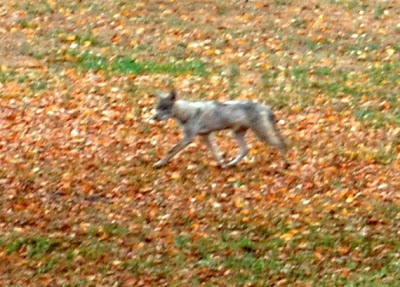 Coyotes don’t present much of a danger to people but they have been known to attack small children. Generally they subsist on small rodents and berries found in the woods but have no aversion to snatching small, sick, young or old farm animals.

This particular coyote has a mottled coat and could be a mix of a domesticated dog and a coyote, the truth is I don’t know enough to know for sure. It walked with its tail between its legs, which is a sure sign of coyote blood. This furry pest was probably (and hopefully) just passing through. Coyotes have migrated over the years into the eastern states searching for food and may be hunted at any time of the year in Tennessee to help prevent their numbers from increasing. The main predators of coyotes are mountain lions, wolves, and man-kind. In the absence of the first two the last one has to step in and manage the population.

12 thoughts on “The Coyote, An Unwelcome Neighbor”