Each year I try to expand the vegetable garden a little bit more. The first year in our home I didn’t have time to put together a garden before the growing season started and we missed out on any vegetable garden.

The second year I put together a set of raised beds that were arranged in an “L” shape. The idea was neat but I left grass around the beds that I had to mow around and it became very difficult to keep the area neat. “L” shaped beds would work great if you have a nice low groundcover – like thyme – or some sort of mulch (either hardwood or gravel based) to replace the grass.

In 2009 I got smarter. I rearranged the raised beds into a grid with a combination of small raised beds, large raised beds, and two large in ground planting areas. 2009’s raised bed vegetable garden was a very good and functional layout. It allowed me to move around all the beds easily (until the cherry tomatoes went wild and took over) and was pretty good for arranging my soaker hose irrigation system.

This year I’ll improve on the previous garden layout by adding a few more beds. There’s no need for a remake I’ll just change the two large ground beds into four 10’x2’ beds and add an extra long bed for perennials like strawberries. 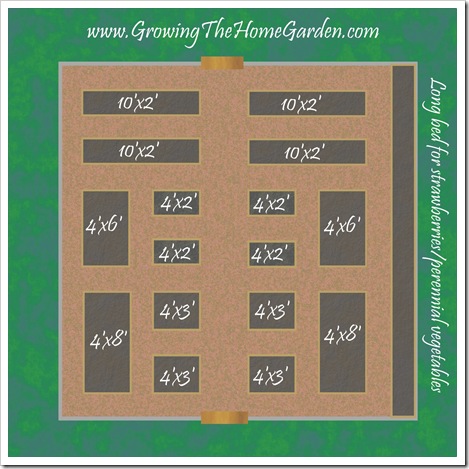 I’ve debated on the strawberry situation as the runners always seem to want to take over the garden – and maybe the world (it could worse, it could be kudzu!). My second option for the strawberries would be to create a completely new bed for them somewhere else in the yard but that might be problematic when the annual invasion of the bunnies begins.

Raised beds are one of the greatest things you can do to increase your chances of success in the backyard vegetable garden (if you want to see why take a look at the Benefits of Raised Bed Gardening and if want advice on building a Raised Bed Vegetable Garden here are some things to think about!).  This is just the basic layout of the vegetable garden and I intend to get more specific soon by putting together a diagram of where everything was last year and where I want things to be this year.  Crop rotation is something I try to practice but it’s not always practical – especially when you try to squeeze too many tomato plants into the garden!

You’ve never been guilty of planting too many tomatoes have you? 😉

7 thoughts on “My Raised Bed Vegetable Garden Changes for 2010”